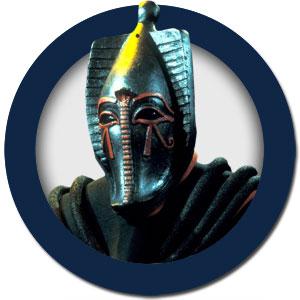 Osirian madman, Sutekh the Destroyer, who occasionally went by such pet names as “Satan”, was banished by his people and sentenced to be entombed alive and sitting uncomfortably for all eternity inside an Egyptian pyramid, his immense powers suppressed by the Eye of Horus on Mars. When his tomb was broken into, however, his power was unleashed and he employed mind-controlled minions and robot mummies in a bid to destroy the Eye.