Did you know there was a “The Ten Doctors”, let alone three of them?!

We have the 1, 2, 3, 4, 5, and 8 Doctors, but apparently that just isn’t enough for some people. Through fan made efforts, we also have The 6 Doctors, The Infinity Doctors, and I can’t find it now, but I swear someone made a joke cover for The 55 Doctors, Featuring two versions of Richard E. Grant. We aren’t talking about any of those, though. Today, we’re here to discuss The Ten Doctors. As it happens in this case, multiple people set forth with similar goals and varying means. Batmanmarch, creator of The Action Figure Adventures, made one version. The second was a fan edit from WhoTuber Babelcolour. The third is a comic made by an artist known as Rich and posted on his website for you to download. Let’s see what makes them tick. 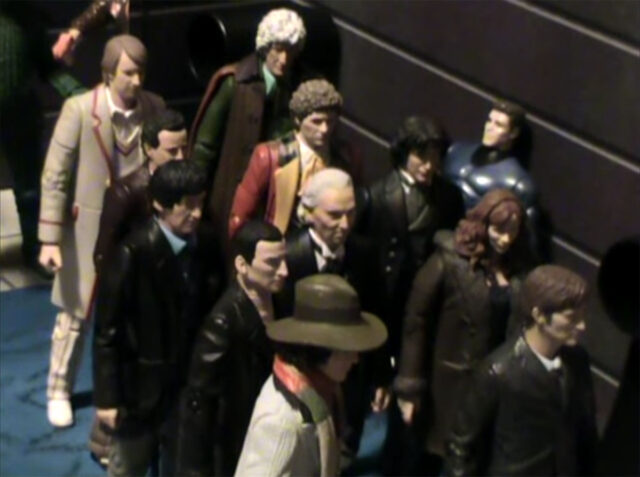 Batmanmarch’s take on the idea has them all brought together by Morbius, determined to exact his revenge and get a new body. The only companions in the story are Donna and K9, leaving a majority of the fanservice-y interactions to be with the different Doctors. Normally, this would be fine, but if I’m being completely honest, not all of the impressions hit the mark. They use the same voice for 8 from The Action Figure Adventures, and were able to get Christopher Thompson on board for his spot on voice for 2, but most of the others don’t quite sound right to me. The overall story is interesting, but admittedly doesn’t feel like one that would be all that different if it only had one or two Doctors. 4 was able to handle Morbius all by himself, why does 10 need to get the whole gang together? If you’re going to get multiple incarnations of the Doctor together for something like this, it should have high stakes, otherwise we lose the idea that the Doctor shouldn’t keep interacting with their own timeline. I mean, either that or have 10 be in the  Still, you can tell it’s a labor of love, and it’s hard not to appreciate what it does. 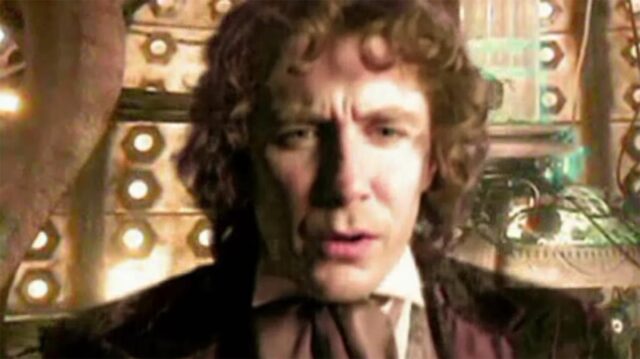 Babelcolour plans to put out a remake of this fan edit with new footage and voice acting and effects, as this series was among his more popular videos, as well as one of my personal favorites. However, I’m tired of waiting for it, so I’m going to review the original and update the article whenever the remake comes out. The story’s quite intriguing considering it’s limitations, managing to tie itself into Day of the Doctor, making it the only one of the three to reference the War Doctor (albeit it felt a bit shoehorned in). An evil future version of the Doctor (the Valeyard? The Emperor? Muldwych? Grandfather Paradox? Who knows?) is trying to screw themself over. Looking back on it now, the references it has to the other Doctors shown in The Brain of Morbius, which you think you would’ve seen in the AFA one instead, kind of give a bit of a hint to the Timeless Child idea. The interaction between the Doctors is kept to a minimal, with whatever they were able to sample, but manages to be charming nonetheless. A big draw for the story, in my opinion, would be that it features a number of cool sets, including a Cyber-Dalek war and the coyly named Dark Dimension. If you can’t tell, fan edits are what I find to be one of the most interesting ways to create Doctor Who stories.

The comic, though, is where things get buckwild. Rich was only limited by his imagination with the format he took for the story, and used it to create something fans have genuinely considered to be the official 45th anniversary story. Resting on the Eye of Harmony after losing Rose, the Doctor bumps into… Rose? And 9? And most of his other previous selves, companions in tow. Together, they figure out what brought them together, what they have to do, and the whereabouts of the 8th Doctor, who seems to be doing something else. The artwork for the comic admittedly seems somewhat incomplete without the colors added in, but the drawings themselves are appealing to the eye and accurately capture the distinct qualities of every Doctor, companion, and enemy. And when I say every, I mean every. Rich took this opportunity to add in references to every era of the show thus far, paying special attention to classic Who. Every recurring character from the show gets a moment to shine, the plot justifies the necessity of bringing them all together, and with each chapter, the plot seems to exponentially thicken. Plots within plots within plots. Easily my favorite part was Nyssa killing the Master, even if he somehow survived. Either that or the plot point where commander Maxil gets confused for the 6th Doctor. Or the part where Grace Holloway kisses Romana. Or the Cybermen converting species other than humans. Or-wait, no, I probably shouldn’t give that one away. Seriously, I don’t even want to say anything more, just go read it. I admit it, the comic’s my favorite.

Though none of these stories mean to bear any resemblance to each other, there were a few things I noticed. Firstly, the 8th Doctor’s role in these stories is a bit smaller than the others. The fan edit, I understand, it’s hard to find more footage to use for him. The comic is where he shines the brightest, but it still feels like it’s from the perspective from someone who watched the movie and thought that was all they needed to know about 8. I was honestly kind of surprised he didn’t have a higher importance in the AFA special, or that there weren’t any important connections between the special and the developing plotline of the series. Ah well, there was a nod to it at the end, so I guess I can’t be too disappointed. Also, they all sort of leave out the War Doctor, with Babelcolour’s fan edit only including him because he was revealed before episode 4 was finished. Overall, though, the stories are enjoyable and unique from each other, and that’s really all someone can ask for.

This article was written by Cecilia Doss
Aspiring writer and voice actor. Recent graduate of VCU, finding outlets for all the Doctor Who lore I've committed to memory over the years.
Other Articles by Cecilia Doss
Doctor Who: The Action Figure Adventures

If you’re a fan of Doctor Who, and appreciate stop motion animation, you definitely won’t want to miss this!

Season 26B: The Edit, The Myth, The Legend

“There’s something to be said for having a proper series of episodes for the McGann Doctor.”

Who is the Curator?

Here's what you think One Response to “The Ten Doctors: Which is Better?”