Michael Ridgway unearths a missing scene from the Classic Doctor Who serial, ‘Destiny of the Daleks’

Recently discovered missing scene from Destiny of the Daleks (1979)

Judge: Davros, you have been charged with unspecified crimes against the whole of sentient creation. How do you plead?

Judge: Prosecution, state your case against the Defendant.

Prosecution: (confident) Ladies and gentlemen of the Jury. You will be presented with harrowing accounts from across the galaxy of how the Daleks have wreaked havoc and destruction, destroyed countless innocent lives…

Defence: Objection! My client had no involvement, on account of being an entombed cobweb-covered-corpse during the time alleged ‘crimes’ were committed.

Defence: Objection! Upon reanimation, my client immediately ordered the release of human prisoners. Hence the survivors’ availability at these proceedings.

Defence: Objection! Earth has no jurisdiction over the internal affairs on Skaro centuries past. Furthermore there is irrefutable evidence of Thal war crimes including slaughtering my client’s entire race with a nuclear missile.

Defence: Objection! Self-defence. The Movellans – malevolent machines determined to conquer the galaxy – were harbouring a dangerous individual who’d attached an explosive device to my client’s wheelchair.

Judge: Sustained. Prosecution, do you have any evidence to support any crime committed by the Defendant?

Prosecution: (starts to lose their cool) The Defendant is the creator of the Daleks! He’s responsible for every crime they’ve committed!

Defence: Objection! My client cannot be held responsible for the end-use of the ‘Mark III Travel Machine’ or any invention beyond his control or crusty entombment.

Prosecution: (loses their cool) Objection! Daleks are the most evil creatures ever created! The Defence is insulting the victims: hundreds of millions of people, thousands of generations…

Defence: Thank you Your Honour. And regarding victims, may I remind the Jury that my client was among the first ever victims to be exterminated by the Daleks.

Jury gasps in surprise. Several jurors shake their fists angrily at the Prosecution.

Prosecution: (panicking) I would like to examine the Defendant.

Prosecution: Davros, what were your ambitions upon your reanimation?

Davros: My supreme plan to control the universe!

Defence: Objection! Prosecution is leading the witness whom is clearly suffering from cryogenic freezing related trauma…

Several jurors give downward thumbs down to the Prosecutor.

Prosecution: Davros, would you describe your views on race as being ‘controversial’?

Davros: One race must survive all others, and to do this it must dominate. Ruthlessly. The supreme victor shall be our race.

Defence: Cross-examination of the witness. Davros, would you describe yourself as a man of peace?

Davros: When all other life forms are suppressed, when the Daleks are the supreme rulers of the universe, then you will have peace. Wars will end. They are the power not of evil, but of good.

Defence: Let the Jury note that my client is a proponent of intergalactic peace.

Prosecution: (outraged) Objection! Utter gobrot! He’s evil! Look at him – he’s laughing maniacally. He even looks like a Dalek!

Defence: Objection! The Prosecution is being racist and discriminatory.

Prosecution: (weeping) He’s a Kaled – the precursor race and anagram of Dalek! His lower half is Dalek!

Defence: Objection! The Prosecution is using my client’s racial heritage and wheelchair décor to prejudice the jury by associating my client with the Daleks.

Defence: Your Honour. Ladies and gentlemen of the Jury. The Prosecution’s case against my client – a vulnerable pensioner – is a gross miscarriage of justice. There is but one question to consider in whether this façade should continue; ‘Do I have the right?’. Defence pushes for a mistrial.

Jurors cheer. Prosecutor curls into a foetal position and vomits continuously for 37 minutes.

Davros leaves the courtroom in triumph. He successfully sues Earth for $100,000 trillion for wrongful cryogenic freezing, and then destroys the whole of sentient creation out of spite. 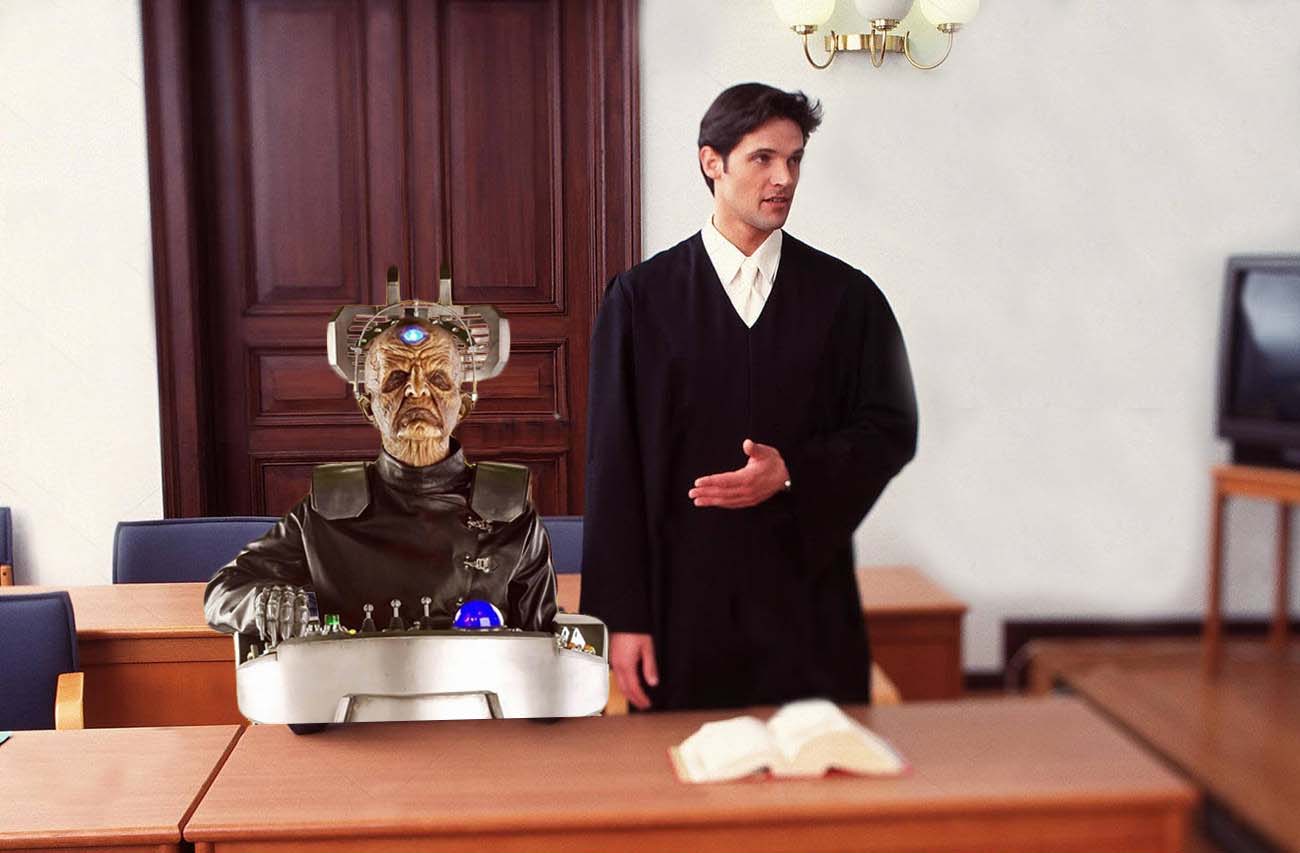 A simultaneous sequel to the ‘Five Doctors’, ‘The Timeless Children’, ‘The Trial of a Timelord’, and Japanese cult classic ‘Battle Royale’

Here's what you think One Response to “The People vs. Davros”