Ever wonder what the sequence of episodes would look like from River’s perspective? Wonder no more! I’ve compiled her timeline as I understand it, as both an episode guide and summary. Spoilers ahead!

River Song is probably the most interesting companion on modern Doctor Who (my Classic Who knowledge being limited at best). We’ve watched her escapades as seen from the Doctor’s viewpoint. But how does River’s timeline look from her eyes? In this article I’ll take you through what I call ‘River Order’.

First let’s look at the episodes. I’ve listed them out so you may watch them yourself marathon-style if you’ve got some time to kill. Or keep reading to get my summary.

Watch these parts of this episode to see Baby Melody: 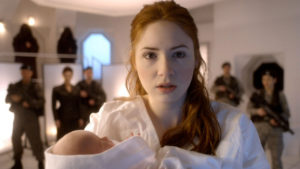 Watch these parts of these episodes for child Melody:

Watch these for all the rest from Mels to River: 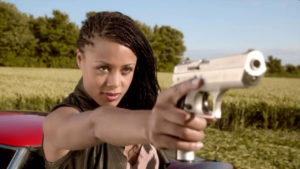 Let’s Kill Hitler
Closing Time (41:52-end)
The Wedding of River Song (beginning-40:07)
The Pandorica Opens
The Big Bang
The Impossible Astronaut
Day of the Moon
A Good Man Goes To War (43:06-end)
episode gap during which River and the Doctor visit the last Frost Fair and also possibly narrowly miss bumping into the Doctor and Bill!
A Good Man Goes To War (10:40-13:23)
The Time of Angels
Flesh and Stone 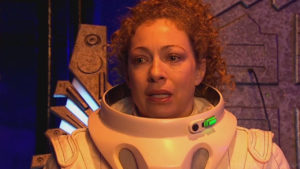 The Wedding of River Song (40:07-end)
The Angels Take Manhattan
The Husbands of River Song
Silence in the Library
Forest of the Dead
The Name of the Doctor

In case you’d rather just read a little bit, here’s…

A summary of River’s life

She was born, Melody Pond; genetically the child of Amy Pond and Rory Williams. Exposure to the time vortex during her conception had made her attractive to Madame Kovarian and the Silence, who captured Amy while still pregnant to monitor (and perhaps affect) the baby’s development. Just days after birth, Melody was cruelly snatched from Amy’s arms and taken to earth in the 1960’s to be raised in a decaying orphanage by a combination of a group of Silence, a brainwashed caretaker, and a semi-sentient space suit. She escaped and lived on the streets with only her wits and her ability to regenerate to help her. As someone both resourceful and determined, she sought out and found her parents Amy and Rory and enrolled in school with them, masquerading as a classmate. During this period she went by the name Mels. 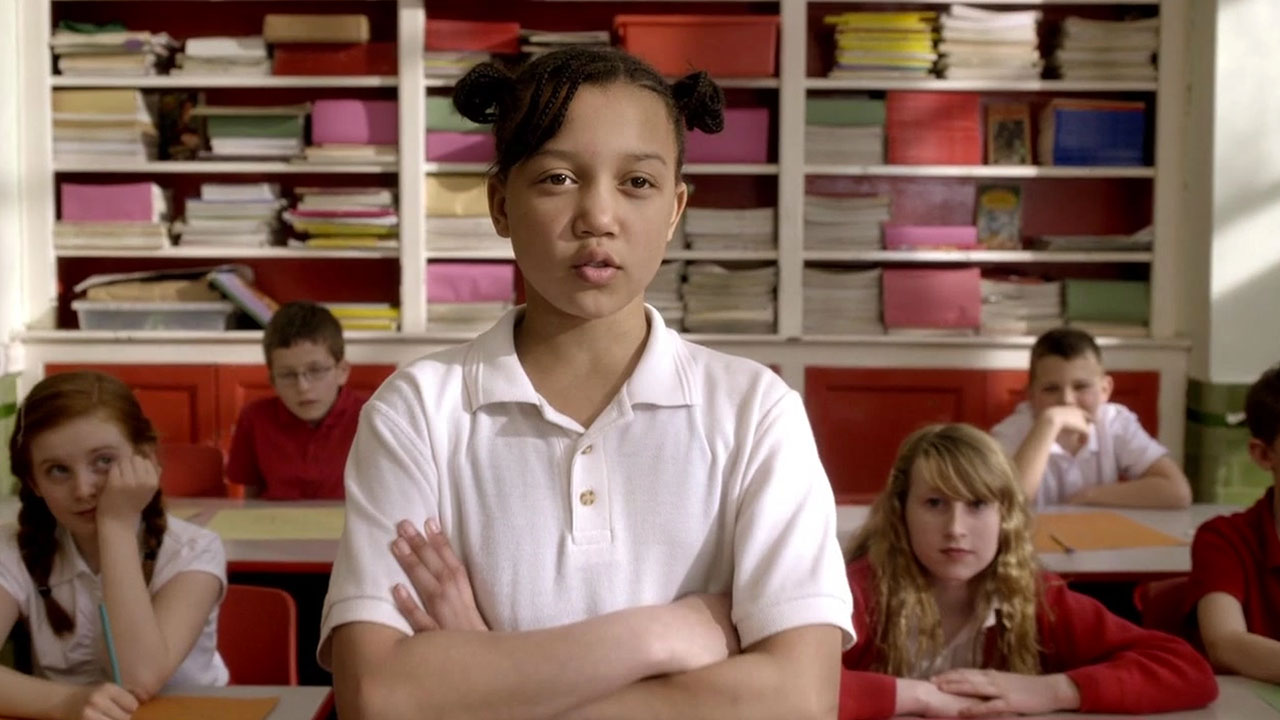 Sometime after graduation, Mels caught up with Amy and Rory on a day they were with the Doctor. She coerced them into traveling to the office of Adolf Hitler, where she planned to kill the Doctor. She poisoned him and was captured immediately by the Tesselecta who began torturing her. The Doctor’s pleading on her behalf made her regret what she’d done and after the Tesselecta released her, she used all her remaining regenerations to save his life. It also landed her in the hospital, spent and weak. 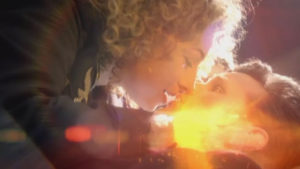 After these events she began going by the name River Song. Her encounter with the Doctor spurred her quest to learn everything about him. It was thus she fell in love with him from afar. The Silence and Madame Kovarian weren’t done with her however, and they forced her back into the spacesuit at Lake Silencio to await her target: the Doctor. At the appointed time she arose, took aim and fired. She ripped all of space and time apart as she made herself miss the Doctor. In the non-day that followed, the Doctor revealed to River that his body was a Tesselecta vessel. They said wedding vows and reset time. She then shot the thing that was not the Doctor, walking back into the lake once more.

Presumably it was after this event that River was arrested and taken to Stormcage. She routinely broke out however, to go on outings/adventures/dates with the Doctor. For most of them the Doctor was unaware of their marital status. River was with him at the opening of the Pandorica, and she was there to witness herself ‘killing’ the Tesselecta-Doctor at Lake Silencio. She did her best to feign ignorance at the child who kept phoning Richard Nixon and she comforted the Doctor after losing the baby Melody Pond, when she was finally able to reveal her identity as the adult Melody. She encountered the weeping angels twice with Amy and Rory. The first time was as a parolee. For the second encounter she walked free, after records indicated the Doctor never existed, effectively expunging her crime. At last one Christmas night while she was attempting to pull off a jewel heist/murder of epic proportions the Doctor revealed himself once more, with a new face. They extricated themselves handily and spent the next 24 years together on the surface of a beautiful planet watching and listening to the singing towers of Darillium. They parted ways both never expecting to see the other again; River having long suspected the night on Darillium was to be their last. 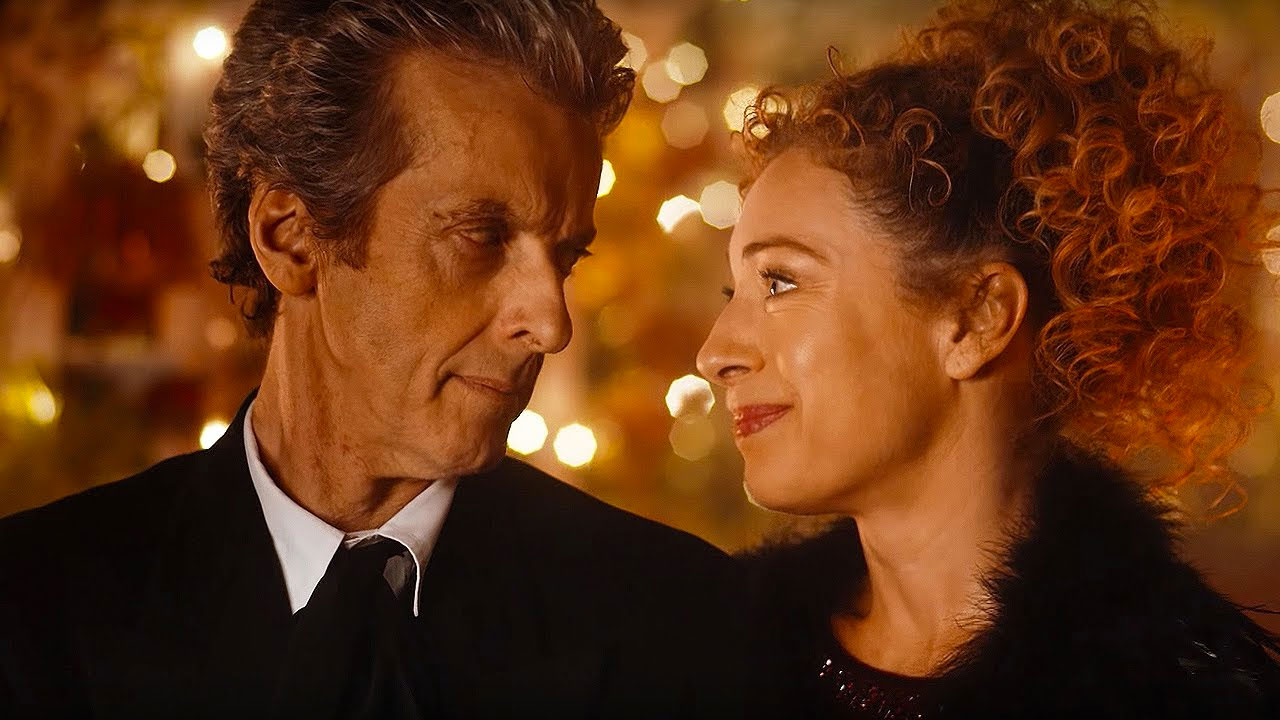 But River would see the Doctor again, in the library when he was so young that he did not know her, yet the strength of her love allowed her to once again save him at her own expense. She sacrificed herself so he wouldn’t have to die. Once again though, we learned all was not lost, for the young Doctor’s first gift to her was a restoration of sorts. She was added to the mind of CAL to exist as a digital memory. Never one to stay within the limits set her, River nonetheless found a way to escape the virtual reality and appear as part of a shared dream between the Paternoster Gang and Clara. River said her goodbye to the Doctor on Trenzalore just before he entered his own timestream in order to save Clara.

We don’t know if this is the end of River Song. Knowing River, it’s entirely possible that she shows up again. Either way, it’s been incredible and thanks for all the spoilers.

This article was written by Tracey Fountain
Tracey can usually be found near or in Albany NY. She likes sci-fi, Doctor Who, the Beatles, the Aquabats, and friendly people being friendly. If you have her number, call her sometime! High-5 Tracey Fountain on Twitter and say hi from us: @Yecartniatnouf
Other Articles by Tracey Fountain
Dreamer, Epilogue

Well, I suppose you want to know how it all turned out.

Marie travels far without going anywhere, leaves her family only to find her family, and meets a familiar traveler who explains dNA and how it relates to her dreams.

Nik finds himself in an unfamiliar place with people who talk of “the Effect” and “drafting”, tracking a mysterious illness that travels the globe. Can Nik, the Doctor and their new friends prevent a cataclysm?

Here's what you think One Response to “*SPOILERS!* The life and episodes of River Song”