I’d put it on the same caliber as Shadowcast or Time Rift.

I’ve always said that more or less any problem someone has with Doctor Who as a television series is rectified with the extended universe, and nowhere does that statement ring true more than with the treasure trove of stories made by Big Finish. Any character that can be given some good development has at some point, and just as the Companion Chronicles shone a spotlight on dear Katarina with Daughters of the Gods, so too has Polly been given some much needed TLC with Resistance. Although she’s done work with Big Finish before, this audio drama is Anneke Wills’s first performance of Polly Wright since The Faceless Ones. Those who appreciate episodes like Father’s Day or Survival for giving a situation that’s more personal to the companion, as well as those who appreciate the pure historical, will feel right at home, as the Doctor, Jamie, Ben, and Polly end up in World War 2, one year after Polly was born. The narration style of the Companion Chronicles gives a lot of insight into what Polly is thinking, as she starts to realize that she might be meeting her uncle, who she only knew through her father’s stories as a war hero who died in a camp for prisoners of war. I won’t give any more spoilers to the story than that, partially because it’s a really good story that I highly recommend you seek out for yourself, and partially because we aren’t simply talking about the audio drama.

One other person who really appreciated this audio drama was Aaron Vanderkley, an aspiring filmmaker. Listening to the audio, he realized a few things: notably, that due to it being a pure historical, it would be relatively easy to find locations for sets and costumes to make an adaptation. Well, with the calendar at the time being flipped back to 2013, around the 50th anniversary of the show, he thought that an adaptation would be a great way for him to get some valuable experience in the art of filmmaking, while also being able to share some love to an era of the show that usually gets overlooked, due to the number of missing episodes, among other things. After some calls were made to the BBC and Big Finish, he got to work on adapting the script, started putting together a crew, and ended up making a quite impressive fan film. 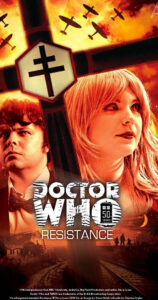 Looking at the two stories side-by-side, they’re both essentially the same, with a lot of the dialogue taken from the source material word for word. However, there are a few small differences. The fan film, for the most part, does away with any narration, which some might take issue with, as the narration is what allows us to give so much focus to Polly. Even so, people who don’t get into the audio dramas might prefer the fan film, as it being put in a visual medium makes it easier to understand what’s going on. I listened to the audio drama before watching the fan film, and I could understand the gist of the story when listening to it, but some of the finer details made more sense to me when I was able to watch it. The acting is fine overall; some aspects of the performances might strike modern viewers as being a little bit off, but it’s important to keep in mind that Vanderkley wanted to seek out people who could capture the performances similar to how they were done back in the 60’s. My personal favorite part of Resistance was seeing that the Doctor’s bow tie was attached to his costume with a safety pin, that’s definitely something the 2nd Doctor would do. As far as fan films go, it’s incredibly well made, and I’d put it on the same caliber as Shadowcast or Time Rift.

When Vanderkley called the BBC to ask about making this, they were interested in the idea, but sent him a list of stipulations for it. One of the biggest was that the adaptation couldn’t be posted to YouTube, which is a shame as the platform would have the biggest audience for it. Fear not, though, dear readers. All you need to do to see it for yourself is make a trip over to YouTube’s weird cousin, Vimeo. This doesn’t mean that Vanderkley’s YouTube page is completely empty, though; in regards to Resistance, you can find a trailer and a production blog, where he talks about the backstory and filming, and where I got a decent chunk of the information you see here. It’s still worth a watch, though, as there’s a lot of interesting insight into the casting process and production issues that I was not able to touch upon. His previous work is also available on the channel. If you’re a Star Trek fan, some of his most recent fan films before Resistance were based on the franchise.

Frankly, I recommend enjoying the story both through the original audio and the adaptation, as I don’t think I’d be able to choose one over the other. The idea of adapting Big Finish audios to the screen is something that few people have attempted to do, save for the webcasts made in the 90s, and I, for one, find the idea fascinating. Whichever way you choose to check it out, though, definitely do it. The pure historical is not a genre that gets enough love as it deserves, which although I can understand why people prefer science fiction over history, Resistance is a perfect example of how it can be just as much Doctor Who as any Dalek story. It’s a great way to introduce someone to one of the most defining eras of Doctor Who. Though I should warn you, if you’re going into this story hoping to see Ben and Jaime, you’d probably be better off choosing another selection from the Companion Chronicles, as they get pushed to the wayside early on. Don’t worry, they get their own opportunities to shine.

This article was written by Cecilia Doss
Aspiring writer and voice actor. Recent graduate of VCU, finding outlets for all the Doctor Who lore I've committed to memory over the years.
Other Articles by Cecilia Doss
Reconvene

“Iris Wildthyme, is that really you?”
“Woah, there. Settle down lovey, I haven’t even—Doctor?”

The Eighth Doctor: An Episode Guide

If you’re hungry for more adventures, you just have to know where to look.