The Doctor, Barbara and Ian rescue a surrogate granddaughter from the clutches of a madman on the planet Dido

The Doctor, Barbara and Ian arrive on the planet Dido for no apparent reason. The Doc is understandably despondent, missing his dear granddaughter, who is no longer a member of the band. Guess he shouldn’t have left her in post-apocalyptic London with one shoe and a fiancé who, let’s face it, was never properly vetted.

Anyway, naturally, the gang gets split up; Barb and Ian encounter a dagger-faced alien who subsequently chucks Barb off the side of a cliff; and Barb miraculously survives and is taken in by soon-to-replace-Susie, Vicki. It transpires an English spaceship crashed on Dido, only two members of whose crew are still alive, namely, Bennett (who is severely suspect) and Vicki (who sports the shortest dress in the galaxy and promptly bends over to flash her pants to the shocked viewers of 1964).

She and Bennett are being kept hostage in the spaceship wreckage by local sociopath and aforementioned dagger-faced maniac, Koquillion, and it is now up to the gang to rescue the survivors from him, while eluding harmless, slow-moving, vegetarian Sand Beasts, and figuring out their group dynamic will suffer greatly if they don’t substitute Susan asap. Neatly bookended.
This Doctor Who story is not a “real” serial. A two-parter, it acts mainly as exposition for Vicki, although one might argue that she was, at least in one scene, a tad over-exposed. If unclear, see screenshot above. Unsurprisingly, our review of this serial got a bit out of hand in that we mainly just took the piss out of it.

The Ratings & Review Section of this podcast starts at 59m19s.

Big thanks, not unlike last time, to Gina, JD and Davis for sending in their mini-reviews, all of which are also included in this podcast episode and posted here below.

Serial ends on a literal cliffhanger

Here's what we think of C011 The Rescue 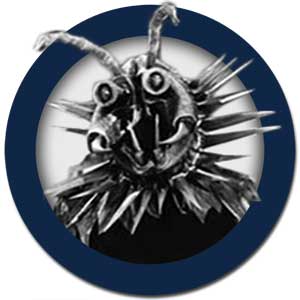 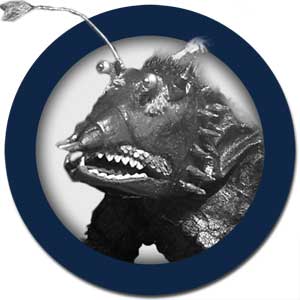 Sand Beasts
Here's what we think of C011 The Rescue

Here's what you think 5 Responses to “C011 The Rescue”